Car bomb in Benghazi. At least 7 dead and 22 injured. City still in chaos 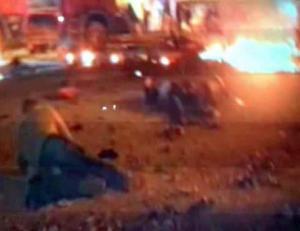 Libya, 25 May 2018 – At least 7 dead, all civilians, and 22 wounded by the explosion of a car bomb in the center of Benghazi, a city under the control of the Libyan National Army (LNA) of General Khalifa Hafthar.

The attack took place on the Jamal Abdannaser street, near the Tibesti hotel, the largest in the city, in a very crowded area, especially during the month of Ramadam. The attack was not claimed at the time.
Probably the attack was carried out by dormant terrorist cells to show that the city of Benghazi is not safe.
Only last July, General Hafthar had announced the total liberation of Benghazi by the jihadists. But the fighting continued: about 40 people were killed last January following a double car bomb attack in front of a mosque and in February another attack killed a man causing 150 injured.

One thought on “Car bomb in Benghazi. At least 7 dead and 22 injured. City still in chaos”